In the back side of the book you can read:

Behavioral economics, traffic paradoxes and other metaphors highlight this though-provoking insight into the NBA and your own thinking.

So I bought the book. Some remarks to remind

Individual scoring is not replaced, it is redistributed.

Look at the global impact of a player, not just to the score.

A tendency to focus on a individual’s scoring while overlooking his other actions that influence the team score.

Individual players are limited in their impact (measured through WOWY (with or without you) method).

A tendency to consider the given sample as sufficient for reaching a conclusion.

When a team wins, in order to explain why they won, we sift through memories of the positive events in the game. When a team losses, we eximine the negatives. This phenomenom is at the crux of winning bias.

A tendency to incorrectly weigh events as more important the later they occur in the game.

All of these beliefs about the importance of crunch-time, for both teams and players, come from late-game bias.

The false belief that championship rings in team sports are a relevant determiner of an individual’s performance.

The false belief that after a season ends, only the team that won was a “championship” level team.

How well a player’s skill travels to other, retaining value on successful teams. For instance assistants, passings, rim protection…

A tendency to cover-credit one player with the majority of a team’s success when there are no other all-stars on the team.

Our mental scoreboards are constructed from heuristics: a way to seek the solution of a problem through non-rigorous methods, such as by trial and error, empirical rules.

Our heuristics become crutches for our narratives. Over the years we have developed a tendency to focus on individual scoring at the expense of Global Offense or Global Defense contributions.

The triangle offense was defined in detail by Tex Winter, and it has been one of the main tactics used by Chicago Bulls and LA Lakers during the years Phil Jackson was coaching these teams. So, it’s not a surprise to see NY Knicks using it.

The system is basic, everybody knows it, the difficult thing is the right execution: the right coordination of all moves, the flow and the right decision making process from all the players takes some years to be ready to compete at high level. It also require the right people (good passers and people who understand how to play without the ball) to make the moves to work fluently.

I found this detailed document about the integration of the triangle offense in Bulls, with so many specific details.

I was doing my visit to the Barnes & Noble store and I found this book, read some pages randomly and I decided to buy it.

The behavior principles of a person, the way to evolve in a relationship with a person who came from a different world, team management, leadership, respect, how to align common goals, talent…

So many interesting anecdotes during the period of 1950 to 1969. Nice book that did my last couple of trips more pleasant.

This is not mentioned in this book, but one of the innovations introduced in the game by Red Auerbach was the Zipper Offense; he was able to develop and utilise the zipper offense before his competitors. The zipper offense created the term “zipper cut”, which we often use when talking about a particular cut that starts off the offense.

During the NBA final series there has been a move which has been mentioned so much in the forums and on the TV, it is the Hammer, which belongs to the Zipper Series of the Spurs playbook. This is really aesthetically pleasant move; and very difficult to implement, by the way. 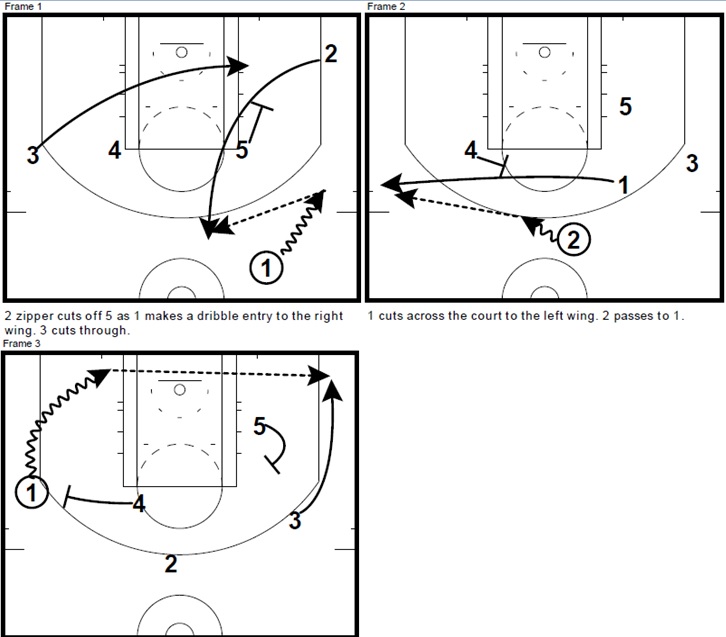