I have investing some time this afternoon watching this video about types of people:

You can find a lot of information on https://www.dots.nz/,

The 4 profiles proposed are called dots: yellow, purple, red and blue. I have saved this summary for my poor memory: 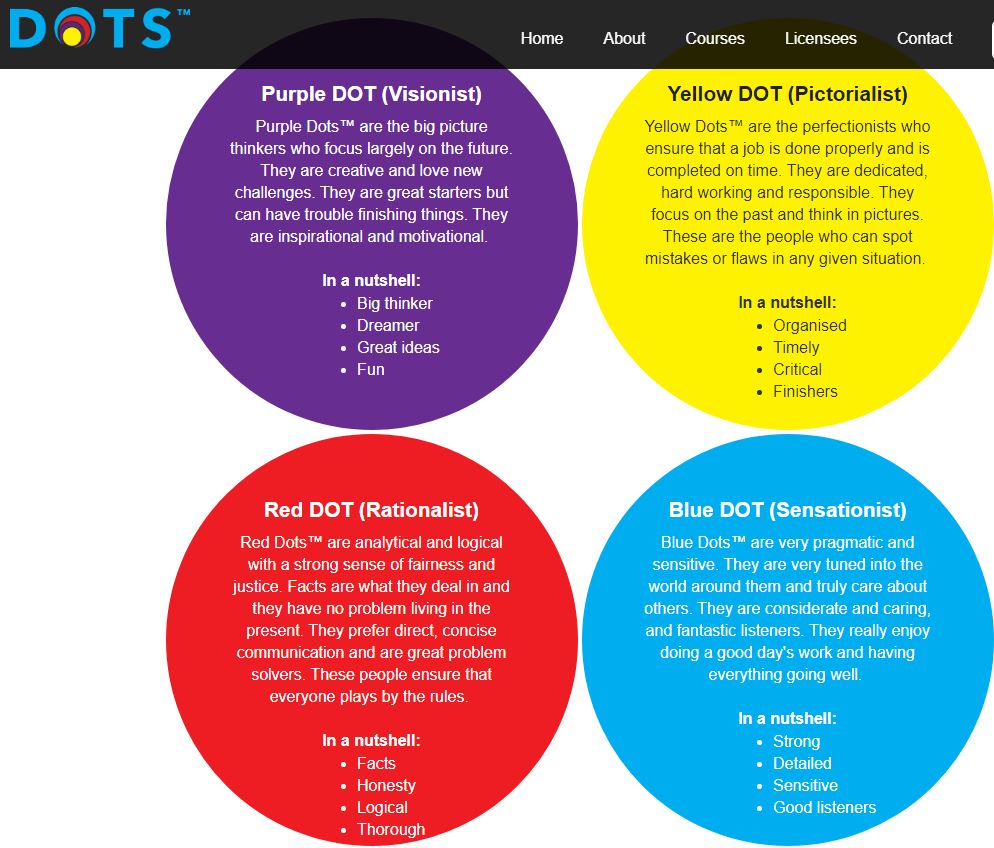 Probably one of the dots is the dominant to you, but more than sure is that you have.

I find this type of things useful for understanding the pre-cognitive behaviors and understanding how to communicate with people better.

“The traditional kind of corporate meeting starts with a presentation. Somebody gets up in front of the room and presents with a PowerPoint presentation, some type of slide show.  In our view you get very little information, you get bullet points.  This is easy for the presenter, but difficult for the audience.  And so instead, all of our meetings are structured around a 6 page narrative memo…. If you have a traditional ppt presentation, executives interrupt.  If you read the whole 6 page memo, on page 2 you have a question but on on page 4 that question is answered.”

I’m going to use this technique as soon as possible.

A memorandum is a note, document or other communication that helps the memory by recording events or observations on a topic, such as may be used in a business office.

In the matrix organization where I work is an useful tool for communication, everybody work in their own silos, and sometimes they do not understand what the others are doing.

A short document explaining area by area what they have done on during last 6 last months and what are the main goals for next 6 months is very useful and enable the teams to understand each other. Remove frictions is key on these organizations.

I was recently asked about how to plan an strategic alignment between business and IT initiatives, where there should be a focus on the:

My approach for this situation to define a set of actions at different levels:

The summary of activities for the 100 days is: 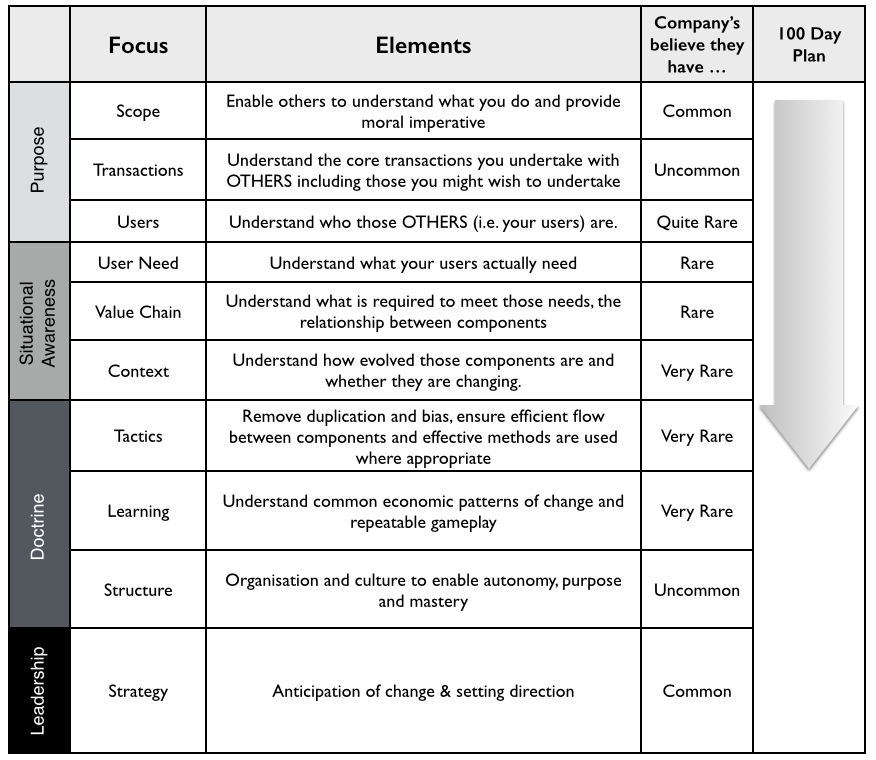 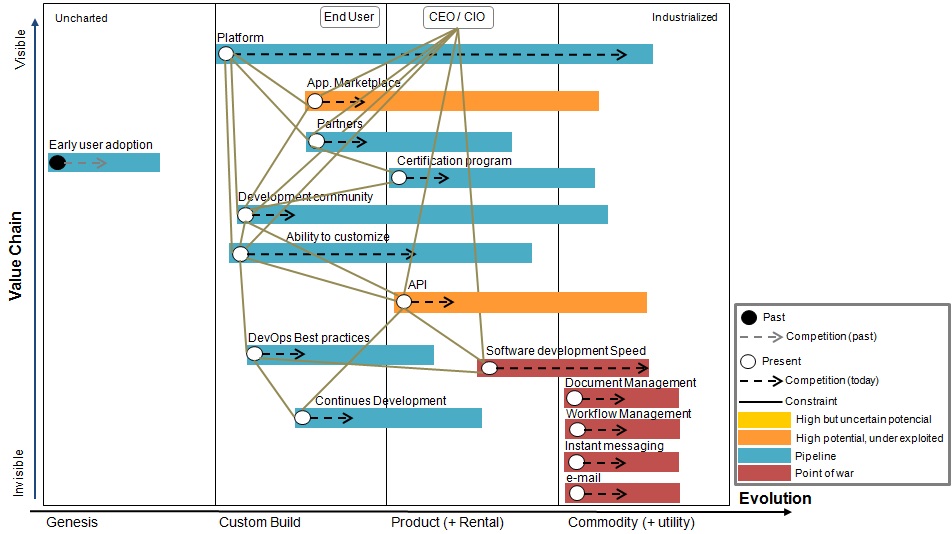 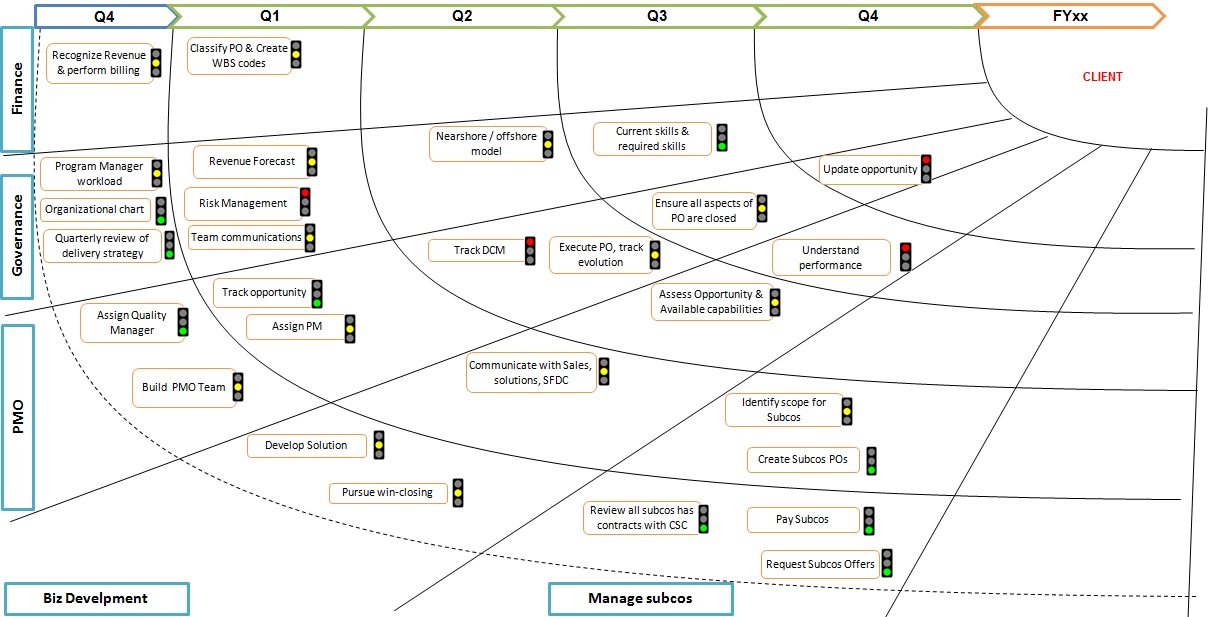 What happens after the 100 days?

Ideally, you can do all this in a quarter, and after that repeat in the next quarter, so you are aligned with business changes, and you can also stop and gain perspective every 3 months. Do not lose perspective: the strategy needs to be review and aligned with the changes.

The approach during the second and other coming quarters have to be different. You can define:

Attending a Program Executive course where communications with customer and with internal teams was discussed. So many concepts were reviewed about efficient communication and how to plan and execute it.

This complex discipline that you need to practice everyday, independently of the talent you have. Set a clear goal, understanding of the audience, measure the momentum of the organization, and evaluate the real impact of your actions….

About feedback and impact of communications, we reviewed this survey that generated a good discussion with the people attending the course. 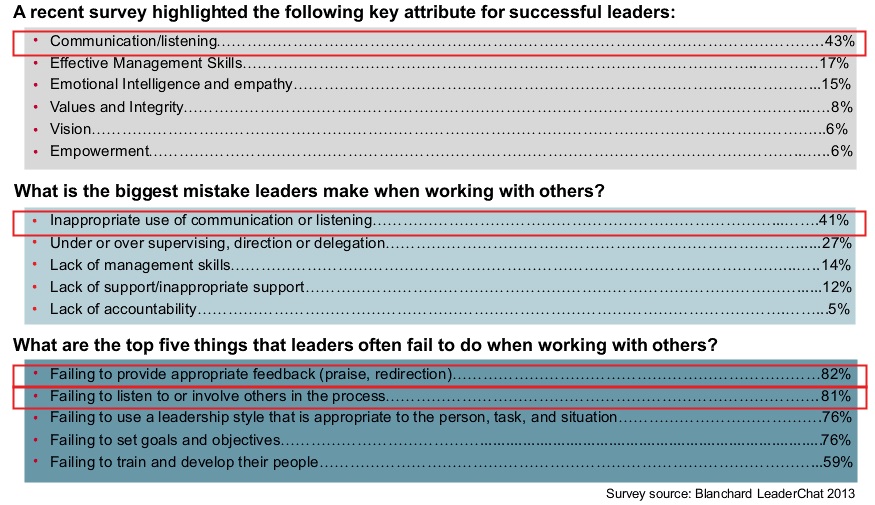 You can find other interesting information here: http://leaderchat.org/

Since almost a year ago I work from home and travel to visit customers, this makes me be close to the customers, but for the some of the delivery teams I have lost the capacity to have face to face interaction, that now is limited to a couple of times a year.

I found this interesting analysis of the Dumbar’s number in this article . This basically confirms what I already know and feel (you need to invest more time in communications, be patient and focus more on the relationships), it just create the concept of Dumbar’s number that tries to standardize the behavior. 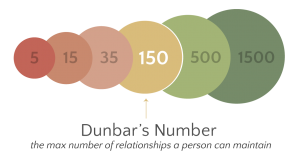 Looking more about the concept, I found this interesting picture done by Joe Glynn, that really contributes to visualize some more real examples with some of the communications channels almost all people use.

Everyday I face issues and people arguing about problems and invesitng time and effort on personal issues more than on resolve the issue itself.

Some people forget how to identify the arguments mentioned by the other party, analysis it and put on context of the situation or the organization.

When you want to defend a position you have to provide arguments clearly, spot it, construct your argument in the context of the situation and then defend it.

I face situations where the person talking to me build his/her own story to defend a position, but the arguments are weak or the story behind it cannot be taken in a serious way. One of the things I found it was that s/he even cannot differentiate the difference between deductive arguments and inductive arguments.

I found a good picture to visualize it, 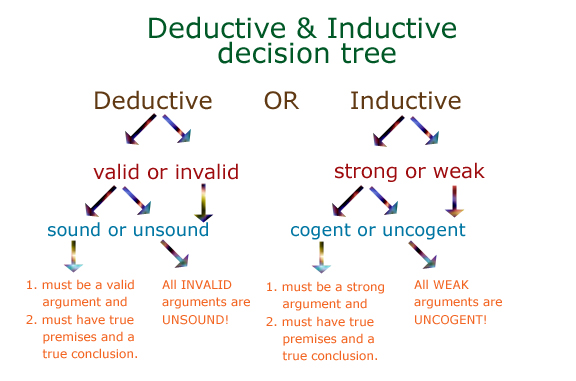 The answering machine is a very powerful tool, you can exert different types of influence 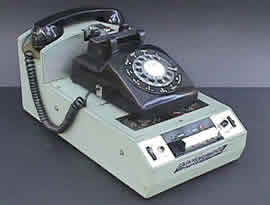 with it, or you can commit errors on the communication.

You can give a short call with your information and mention the purpose of your call.

If there is an issue where you had some e-mails going and coming back, you probably want to stop ping-pong messages that provokes a negative loop. You call, but you find the answering machine: give a large message with the strong approach you want to transmit and finish the message requesting to have a call as soon as possible.

Take care giving so many messages, you will look like a jealous girlfriend.

Finally you can just hang up the telephone, and you will have nothing.

Our Application services are very simple in the way they are organized: critical services and key services. The first category are covered 24×7 and 365 days. The second ones are just 8×5 on working days.

The rule is simple: what service do you want to pay? just pick one.

This year the finance closing period coincides with Easter season and the people supporting key services are at home. I have received an interesting escalation asking why the support is not available Today for the closing period. Funny, isn’t it?

I’m so sorry for the problems that it could generate to you, but we are closed Today. We can have a meeting next week to review if the extra availability requirements you have for these services. 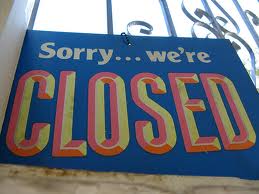 You can make a customer aware that something is important, but they sometimes do no take care. But these senior escalations in the client, where they do not take care about why nobody is available, are really good compelling events.

I have read and re-read this letter a couple of times. For sure to understand it you should have some knowlede about NBA.

By the way, 2 days later NBA commisioner denied the trade because “sport reasons”

It would be a travesty to allow the Lakers to acquire Chris Paul in the apparent trade being discussed.
This trade should go to a vote of the 29 owners of the Hornets.

I cannot remember ever seeing a trade where a team got by far the best player in the trade and saved over $40 million in the process. And it doesn’t appear that they would give up any draft picks, which might allow to later make a trade for Dwight Howard. (They would also get a large trade exception that would help them improve their team and/or eventually trade for Howard.) When the Lakers got Pau Gasol (at the time considered an extremely lopsided trade) they took on tens of millions in additional salary and luxury tax and they gave up a number of prospects (one in Marc Gasol who may become a max-salary player).

I just don’t see how we can allow this trade to happen.

I know the vast majority of owners feel the same way that I do.

When will we just change the name of 25 of the 30 teams to the Washington Generals?

– Cleveland Cavaliers owner Dan Gilbert in an email to NBA Commissioner David Stern regarding the proposed trade that would send PG Chris Paul to the LA Lakers.