This is an idea, maybe a crazy one, but here we go.

I see social media companies are an useful tools and they have enabled so many positive things, but in some uses they are a problem society, not only by the use given by an end user, but by the controller of the tool itself.

So many people are talking about this and how these companies are able to dictate their own rules, laws and apply them without control; there are not separation of duties and they are not based on the principles that the countries have given to themselves.

I wrote a little bit about it in October, trying to dig in the issue and understand better the roots of the issue.

To do it, I used this map created by Simon Wardley that I modified to show where a company as Facebook is acting around so many principles of our society. 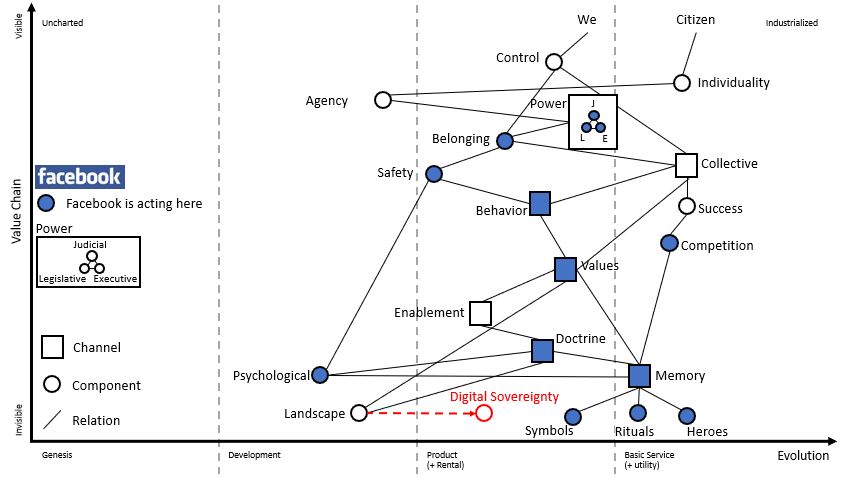 There is an antitrust case that is in the early stages between 46 states of US and Facebook where basically the states accuse Facebook of suppressing its competition through monopolistic business practices.

There are specialists and journalists claiming that Facebook, Alphabet, Amazon should be split into different parts so some competition could grow around them. I do not see this to be easy in case of Alphabet neither Facebook. The quick minds think that separating Facebook into Facebook 2.0, Instagram and WhatsApp is the right thing to do, but I do not see this move useful for anybody. The reason? a new social media giant will appear, acquiring competition again and in 10 years we will have the same problem.

With the available cash that Facebook has right now they can acquire so many relevant competitor that challenges them. Go to a website and check, they have right now around 55.000 million dollar cash. What do you want to acquire?

You can say, “What is the proposed solution you have for this?”, well I have a crazy idea about it, and I hope you can challenge it.

I would like to start reviewing the Real State Investment Trust (REIT) first.

REITs were established by US Congress in 1960 to give all investors, especially small investors, access to income-producing real estate. It was a manner in which the best attributes of real estate and stock-based investment are combined.

Before REITs the benefits of commercial real estate investment to regular Americans were not available, you had to access to these type of investments through large financial intermediaries and this was only accessible to wealthy individuals.

With the creation of REITs these profitable assets were accessible to more people.

This legislation have evolved since the first tax reform act. Since then, the U.S. REIT approach has flourished and served as the model for around 40 countries around the world (even Spain created them, they are called SOCIMI).

In total, REITs of all types collectively own more than $3.5 trillion in gross assets across the U.S. (not bad right?).

REITs must pay out at least 90 % of their taxable income to shareholders—and most pay out 100%. In turn, shareholders pay the income taxes on those dividends. This fact attracts to many small investors as it’s a business easy to understand and enable them to have some extra income.

My point is that the government was able to make accessible to the small investors a high amount of valuable assets, in a moment where the Real State prices where going up too much and they were creating a lot of wealth to just some citizens.

Right now in 2020, there is a problem with the social media, where each individual feeds these platforms and they are not able to access to the benefits of these companies. You can argue that you can buy stocks of Facebook, Twitter or any other social media company, and make some money with the change of price of that stock. But to me this is not enough, you just can see the percentage of free cash flow these companies are reporting: it’s huge!!!

I repeat: it’s huge amount of money that they generate and they do not share with the people. Other companies are not able to provide a consistent amount of FCF. You can check it.

The free cash flow is the money that they have in the pocket after investing in all operations, R&D, financial investment, etc. They have so much money that they do not know what to do with it (remember the 55.000 million dollars Facebook has right now?).

At this point you can say, “what is your crazy idea about it?”

The federal government should create an investment vehicle called SMIT that forced all social media to pay out at least 90 % of their taxable income to shareholders.

In this way, the companies share the profits with the citizens that wants to own these type of stocks. It will continue to be a huge profitable business where the society could benefit on it.

In this way I’m sure the management teams of these companies will invest more money on R&D projects, which will contribute to the future too.

Would you invest on these type of companies?

You do not like to buy stocks? Ok, no problem I’m sure another financial vehicles will be created as ETF or any other one that adapt to your investor profile.

Arguments against this idea

I recognize is a crazy idea that the companies will not accept, but my point is that in this way Social media companies can bring back some of the benefits that they are taking to the people that are in fact the people that feed these platforms with data. Right now the the scale is very unbalanced.