Simon Wardley has first written about digital sovereignty and later he did some comments on Twitter about the moves a company as Facebook is doing. 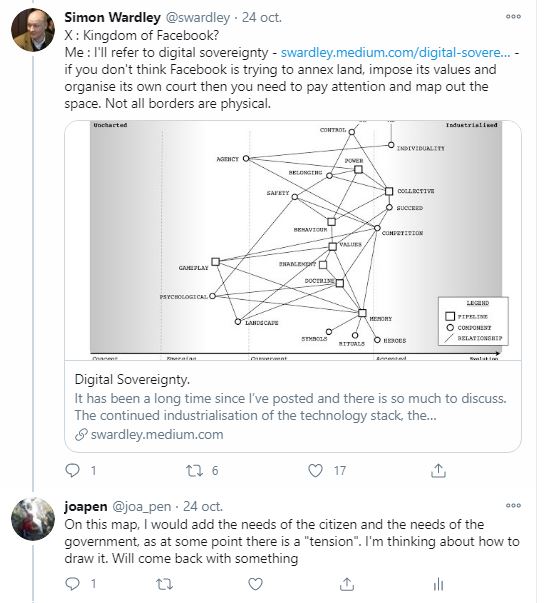 So, first I have done is a short analysis about how Facebook works, decomposing the main components of a huge company as it is. I know, over simplification is not accurate.

Then the basis of the discussion goes around a map that is explained on the digital sovereignty post. Sorry but if you want to understand the next paragraphs you have to spend some minutes reading it.

To define slightly better the conflicts that I have seen I would like to do a small change on the “power” component, dividing it into the classification that is common at least in democratic countries: legislative, executive and judicial.

This differentiation is important, and we will see later why. Just as a highlight of what’s coming next, the point is that sometimes, the “executive” power is using the digital powers to skip from the physical sovereignty that the citizens of a land have provided to the politicians.

Where can we find conflicts between government and Facebook?

There are thousand of scenarios, and it’s impossible to cover all of them, but I will try to comment some of them. If you have another example, please let me know.

Let’s put Spain as example (I know a little bit more about some rules here). So have clear laws about how politicians can communicate and persuade citizens, there are laws about freedom of expression and other mechanisms that enable an imperfect but accepted system. Someone could tell me that traditional channels of communication (newspapers, radio and TV) can influence as the same than Facebook on the elections, so let’s try to see this in deep.

In Spain the 24 hours before the voting day politicians cannot advertise themselves. Here the government controls traditional channels of communications stop offering advertisements, but in the internet, you can find volumes of information about the political parties 24×7 and a last minute “news” that expands quickly on the social networks.

The conflict? Facebook and other social networks are invading the land of power, not executing some filters during these previous 24 hours. They can say that are opinions, but the reality is that a lot of this content was there thanks to advertisement that they are monetizing.

Situation #2, Misinformation: US elections in 2016 and the fake news

Here Facebook and other digital channels have the ability to skip a simple rule that the Spanish people gave to ourselves.

In 2016 during the US elections there were in 2016 where it was clear the manipulation done on Facebook platform, even do that Facebook for this 2020 elections they have enabled an action plan where they are removing, highlighting or filtering some of the content published on the platform.

One of the key points where the credibility of the information. A trusted traditional channel of communication have a credibility, and their editors value it as key asset of the company. They can be more aligned to one party than to other, but they will not enable that a third party will publish any information without their control and without checking if this is a credible information or not, basically because their credibility is at risk.

Facebook was not seen as a channel of communication, they saw themselves as a platform where people publish things and they monetize it. At some point the maintain that people clicks “like” or “share” things as an individual act, and that there is not anything wrong on it. The problem comes when someone understands that with enough money and the right knowledge about how the platform works, they can modify the perspective or the perception of something, and we all know that a “lie repeated 1000 times is still a lie” but some people believe it.

A trusted traditional communications channel would have not enabled these fake news.

The manipulation of the platform had several consequences but I would like to focus on one. For this 2020 elections, Facebook have enabled a set of rules to remove, filter and avoid the spread of a publication. The questions that come to my mind are:

The conflict? A private company is exercising executive, legislative and judicial power, over the individuals of a nation.

The digital sovereignty have the same elements of the sovereignty and on this case FB has the upper hand of the power, nor the citizens that gave themselves a framework for living as a collective.

Kenneth J. Gergen describes civil discourse as the “language of dispassionate objectivity”, and suggests that it requires respect of the other participants, such as the reader. It neither diminishes the other’s moral worth, nor questions their good judgment; it avoids hostility, direct antagonism, or excessive persuasion; it requires modesty and an appreciation for the other participant’s experiences.

In a democratic land, if you want to organize a protest, you can call on it, ask for permission to walk on the streets of a city and protest about the ideas you have and being heard by other citizens. There are some laws that tells how you can behave, there is a control of how you do it, and another citizen can claim that some aspect of that protest was against the law.

In Facebook you can organize a protest creating thousand of bot-users, creating and budgeting a campaign, and spreading it in the platform.

The questions that come to my mind are:

The conflict? A private company is exercising executive, legislative and judicial power, over the individuals of a nation.

The digital sovereignty have the same elements of the sovereignty and on this case FB has the upper hand of the power, nor the citizens that gave themselves a framework for living as a collective.

Civil and political rights are a class of rights that protect individuals’ freedom from infringement by governments, social organizations, and private individuals. They ensure one’s entitlement to participate in the civil and political life of society and the state without discrimination or repression.

In the space of Facebook’s land:

Well, there are tons of discussions and controversy around data protection but the basis is that there is a basic conflict.

The conflict? You do not have control of the data that you give to Facebook, and governments have more or less data protection policies.

Other conflict? They are tracking you in thousand of ways, you just consult the list of patents they have related to this: they control the camera, the microphone, the way you touch the screen, location….

In the original map where Simon draws, the one called “the culture map”. The map is a representation of what culture. The positions can be widely discussed but what is important is to realize that culture consists of many components including values, behaviors, memory and other concepts linked to our collective (family, friends, church, supporter group, region, nation…).

I have added to the map a component, “digital sovereignty” that some day everybody will recognize as a valid concept, and later it will just called “sovereignty”, in the same way that now a phone was once a “mobile phone”.

Some words to ponder, consider and debate

You can say: you can individually stop using Facebook!!

And I will reply to you, that your are partially right. As an individual, I can remove my Facebook account, but we live in a society and we belong to collectives that when something new comes we have to accept the positive things that this “new thing” has, and control as best as possible the bad things that the “new thing” has.

When cars became popular, nobody told “stop using cars”, the citizens created rules to live with this new technology, have the benefit of the positive aspects and minimize the bad aspects.

So, one of the original questions raised by Simon is very valid:

how to balance “Me” vs “We” in a modern society?