In case you want to read it in Spanish, you can do it here.

1.- Evolution of the video game market

The video game market evolves a lot and very fast. The main aspects that have changed in the last 10 years are:

To understand the magnitude of the industry, very detailed reports of its impact in countries like the US can be found . The capital flows are huge. There are many similar reports that focus on other geographical areas or specific areas of the industry. 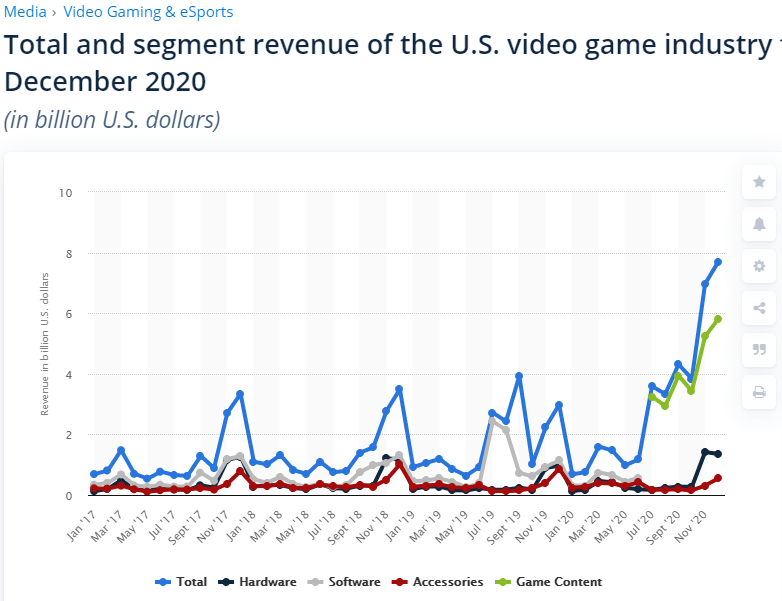 1.- The player has changed his consumption habits:

One of the consumer habits that are taking root in the player is the passive watching of video games on the screen (as if it were watching TV).

Before, the sales channel was limited to the product, which physically traveled from the manufacturer to the distributors and then to the stores.

Before the content creator was a big corporation, since developing a game was expensive and required tools and environments not available for everyone. In addition, when distributing the game, it was necessary to have a very large distribution capacity.

This has changed a lot thanks to two major factors:

The first thing to emerge were content publishers, creating games for end users. As the industry has grown and evolved, these content publishers have been incorporating independent studios into their templates and have focused on the E2E distribution of content.

Later, the natural evolution was to become a market place, in such a way that they removed intermediaries in the distribution chain, offering their content directly through those market places.

Controlling the generation and distribution of content is very important and the evolution of each of these market places within a highly competitive environment is important. For example Valve is a company that is very reluctant to adapt to changes proposed by users, they define the lines of the content and the evolution of the same, on the other hand, Tencent adapts to the requests in a better manner and has into account the sensitivities of the players (better listeners of customer feedback).

There are a number of large companies that try to control the management and dissemination of content, pumping in large amounts of money to prevent small content creators from flourishing. In fact, if one of them flourishes, sometimes the little one is acquired by the big one.

Market places are not only limited to promoting games, but also offer a lot of content to players: video content, e-sports visualizations, a lot of physical merchandising, avatars, game “powers”, etc.

The ability of a publisher to keep a game alive, version it, and keep it relevant for many years makes the company generate a lot of free cash flow for many years. The case of Super Mario Bros, created in 1983, by Nintendo is very remarkable. The benefit is not only monetary, but it adds a lot to the brand image and the recognition of the brand by the population (my elders know who Mario Bros is, but not what “Call of Duty” is).

Big publishers release the most powerful games (or new version of a popular game) in October and November. Other games are released in March-April in order to maintain high revenues in other parts of the year. E-sports are usually published when the league begins the season.

It is important to understand how capital flows have changed their way in these years, and how the growth of the industry is due in part to technological advances, consumer habits, and the ability to monetize in different ways.

In individual games this is something that does not have much incentive, but in group games it does.

For example, the player of Candy Crash usually has linked to their contacts (also players) and can see which phase of the game they are going through. In the end you compete with your acquaintances. Candy Crash gives the option to buy the phase step or buy some “helps” that allow the player to phase. No one here can tell if you are using your credit card to “win”.

In other games such as warfare or sports, the use of extra options must be very well taken care of by the content creator so as not to distort the competition too much. That someone has a cooler shirt than the opponent is not a competitive advantage, but having an extra energy is. Knowing how to maintain that competitive tension without resulting clearly decisive advantage is essential so that the opponent does not feel cheated.

The management of intellectual property has always been a very important area.

Before, licenses were distributed on the product and the ability to distribute a product in a geography.

EA Sports (from the game FIFA) has a very clear management of operating licenses: always pay a lot for licenses so that a competitor can never sneak in. So far it has been the only one that has been able to pay them and they continue with the policy of paying them very expensive in order to continue to maintain the dominant position.

Right now the distribution of video games through market places is one of the decisions that content creators have to think very well, since this exposure conditions them in growth and in obtaining economic returns.

If they want to make a TV series of a video game, this intellectual property protects the creator; and the TV producer has to negotiate with the owner of the game. The demand capture of video games right now has a high capacity to attract from other areas that make publishers have a lot of value in their hands (apart from the recurring billing they get with subscribers to games).

6.- Looking to the future

Potential evolution of the industry for the next few years is anyone’s guess, as there are many uncertainties regarding what user trends will be.

I try to mention some of the components that can come into play massively in the industry.

Industry players will decide in which area they will invest their capital. The little ones will have to be very careful to focus on the areas that they think will bring future billing. The giants, with a greater financial muscle, will be investing in all areas so that as they become economically viable: strengthen them.

Understanding where each of the needs is and where they are going is essential to focus. In any case, in some of the proposed components it is not known when it will be possible for them to have a turnover adequate to the investment made. Some examples:

Many companies have the idea that the idea of ​​Second Life that did not succed about 10 years ago will have repercussions in the future. In this field, the use of games as a platform to allow players to interact and specific events such as the Travis Scott’s concert in 2020 in the Fornite game are examples of the attraction that this type of new forms of interaction are having.

The certainty of how the platform and the interactions between people will be is still very uncertain, but there are many large companies working in this area for years to be prepared for when the environment (one or more) arises that will have more acceptance by the users. users. Here being the first has a lot of advantage.

A metaverse is the fictional virtual world described in the aforementioned work “Snow Crash” (“Virtual Samurai”), or a collective and often shared virtual space created by convergence and compatibility with an aspect of external reality. The search for the metaverse that causes acceptance is one of the most sought after visions in the industry.

They are services where the user uses the power of remote servers to play, not needing so much power on the local device. It works like video-on-demand services and stores games remotely for the player through client software. The client software would send the player’s inputs to the server.

Looking at the amount of financial muscle there is here, it could be said that there is not so much uncertainty and that it is in fact a step that is understood to be natural to attract more mass of players.

Youtube, Twitch, Facebook gaming,…. They are video channels where championships or games are watched. Watching live championships is one of the events that is being explored the most by these streaming platforms.

These channels monetize their broadcasts basically with advertising. Also, streaming is highly promoting multiplayer games. This creates competitiveness and actors or influencers that attract a large audience (example: Ibai Llanos).

The market is divided between Asia and the West. Behaviours and market penetration are quite different.

This is a trend that is deeply rooted in Asia, less in the West (Candy Crash, Call of Duty…).

The problem is that monetization is more complex, since placing ads is very annoying and causes rejection.

Right now this type of game is more ingrained in Asia than in the West.

7.- Roblox: a disruptive agent and surrounded by a lot of uncertainty

Roblox (acronym for robot + block) is an online multiplayer video game / platform in which users can create their own virtual worlds (thanks to Roblox Studio) and interact with other users. Yes, all of that.

I learned about Roblox when I started to ask nephews and children of friends between the ages of 9 – 14 and they all know or play with Roblox. They started with a lot of educational material and this means that the age of beginning of interaction with the environment is promoted by the parents. Then the child quickly finds a way to play other games and to bring in his friends. As @@ R_yZyy comments: “it is the metaverse of the youngest”, and we must see how it evolves (a lot of uncertainty at the moment).

If we modify Wardley’s map a bit from the current situation and highlight (in red) where on the map Roblox is trying to carry out its activities, the result is this:

In certain aspects it competes with Unity, but as you can see, they are not the same. Unity went public at the end of 2020. Roblox was going to do so in early 2021, but postponed this event to revalue the company again (Unity doubled its market value in 2 months).

Roblox has a life cycle whereby the user arrives at a time, when they grow up, they want to play other games: “when they grow up” and this is a handicap for the environment. At this point there is a very big challenge of user retention.

This is my personal vision of the weather patterns that condition the players in this industry.

This is my personal vision of the types of plays that condition the players in this industry.

That’s it. Any constructive feedback is welcome.