Disclaimer: this is not a Wardley map!!

This is a graphic representation of the products commercialized by Apple, adding some information that helps us to gain perspective.

I have classified them by the nature of software technologies, simplifying it too much.

This is the graph: 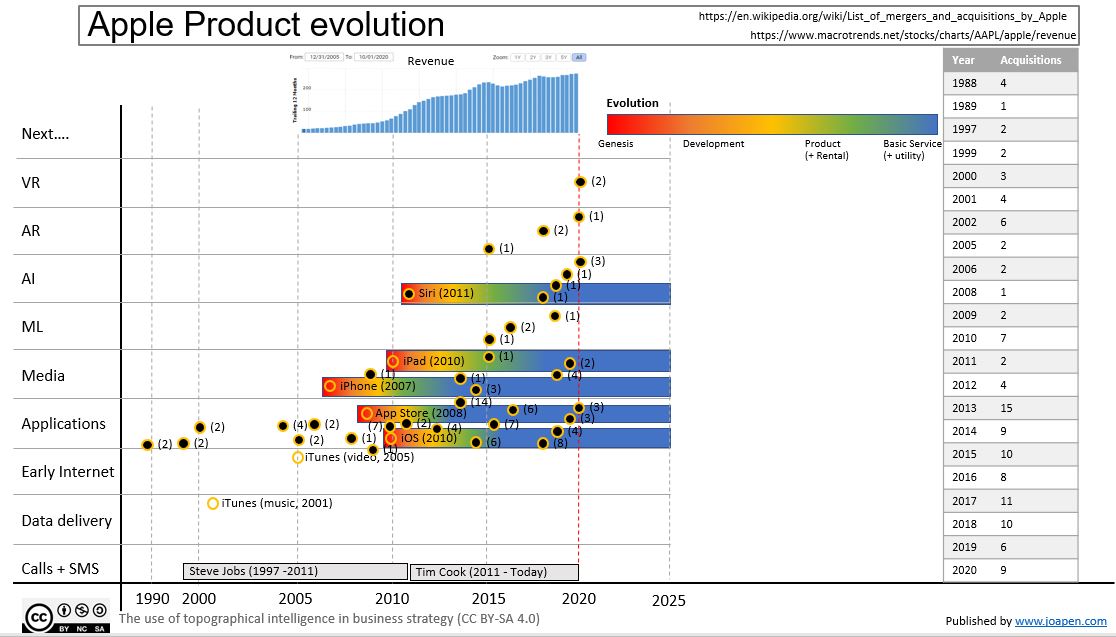 We can see that since 2013, the number of acquisitions done by Apple have increased in numbers. We can think that the company size was bigger so they were better positioned to do these purchases.

Some people says that Apple is not innovating, the argument I listen is that they really are not adding any new product to the market since so many years. But when you look at the type of companies they are acquiring, you can notice that the investment on Artificial Intelligence, Augmented Reality and Virtual Reality is there. It does not mean that they will succeed, but they are doing their job to invest and innovate.

This is an unpopular opinion, but I will write it down. I think that Steve Jobs created superior products and things that changed the way the electronic devices were used. I think nobody rejects this point. But I have the opinion that Tim Cook did an excellent job as CEO to provide value to its shareholders and turned Apple in a machine of doing money quarter by quarter. I think this is not well recognized as the job done by Steve. Nowadays, for instance so many people recognize the impact of Satya Nadella in Microsoft, but no at the same level that Tim Cook is doing in Apple.

Some people have told me, why Warren Buffett came in into Apple in 2019 and not before. Was this a mistake, or it was done on purpose? I would like to say that the people in Berkshire Hathaway are not stupid, and I have not the answer, but I can figure out that Apple demonstrated to them that they are transitioning from product company to service company where the users consume products and services as a basic thing in their lives. Berkshire loves cash cows and Apple now is that cash cow that they love to have in their portfolio.